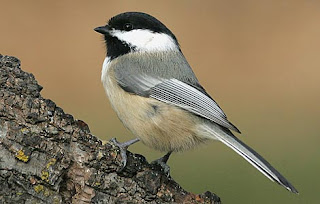 have to share this wonderful story I read in the latest Birder's World magazine.
Alaska story: Chickadee revives fallen mate
Dear Birder's World: The following is an account of an unusual and inspiring event I witnessed at my home when I lived in Alaska.
On March 29, 2008, I heard a thud against our picture window. I knew right away it was a bird. On some instances, I've taken birds in by the heater where they can revive. But on this day, I went to the window and just stared out. There on a patch of snow lay a chickadee on its side looking dead. One by one, three or four chickadees came to peck at the bird's beak and then its side. Suddenly, the chickadee rolled onto its back with its fee straight up in the air. I was sure it was dead. Then, one lone chickadee flew down and pecked at its beak, then pecked and paused at its side.
The pecking chickadee flew up in the air and hovered over the 'dead' chickadee, slowly lowering itself until its talons were linked to those of the chickadee on the ground. It lifted the 'dead' chickadee about one foot in the air, and it came to life. They unlocked talons and flew over to a mossy stump. The healer bird pecked at the other's beak and nestled against its side. They both flew off together.
Lorraine Stone
Jackson, New Hampshire 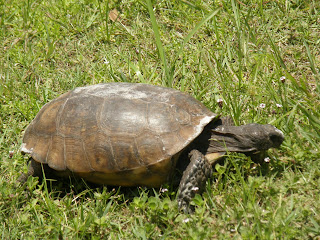 Captured this little fellow (gopher tortoise) just as he was getting ready to take a bite, check out the stretched out neck! 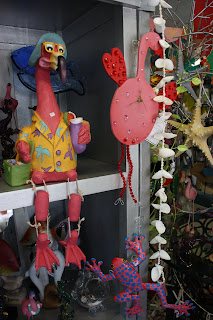 This is inside one of my favorite shops that I always take visitors to.....Margaret Albritton Gallery in Placida, FL. It's so much fun to go there and very colorful as well. 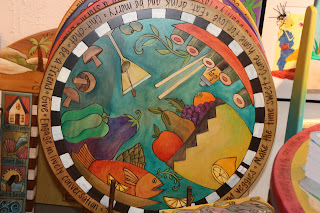 Found this while shopping in St. Armands Circle, Sarasota, Florida. Pretty expensive at $450 but it is hand carved and hand painted and was about 18" in diameter. If only I could afford to buy beautiful pieces such as this.
To see more Color Carnival visit Martha here http://colorcarnivalmeme.blogspot.com/ 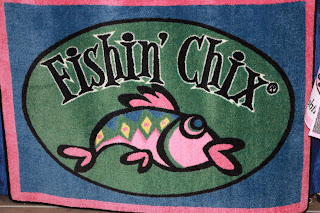 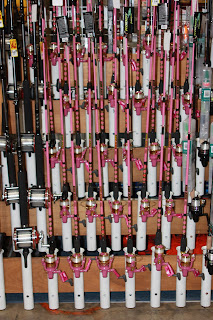 I know women like to fish but come on pink reels on a pink rod, that's a bit much for me. Maybe for little girls though. 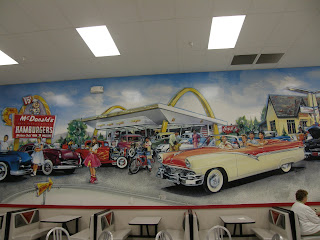 While traveling (? can't remember where) we ran into a Wal-Mart I think, and found this really cool McDonalds. So, of course, I had to run out to the car to get my camera just so I could get another CC shot!
Color Carnival is hosted by the fun and fabulous Martha .... click on the link below and and see more CC photos.
http://colorcarnivalmeme.blogspot.com/
Posted by Vicki ~ FL at 3:52 PM 6 comments:

Vicki ~ FL
My profile photo....a female sea turtle path leading to her nest. Sea turtle nesting grounds are limited to the SE region of the nation. They extend from the Florida Keys to Virginia on the Atlantic Coast, and from Texas to Florida along the Gulf of Mexico. All sea turtles are classified as endangered except for the loggerhead, which is a threatened species and the one which most commonly nests here in Florida. An average loggerhead nest contains a clutch of about 100 eggs..incubation takes about 60 days before producing 2" hatchlings that weigh only 3/5 of an ounce.